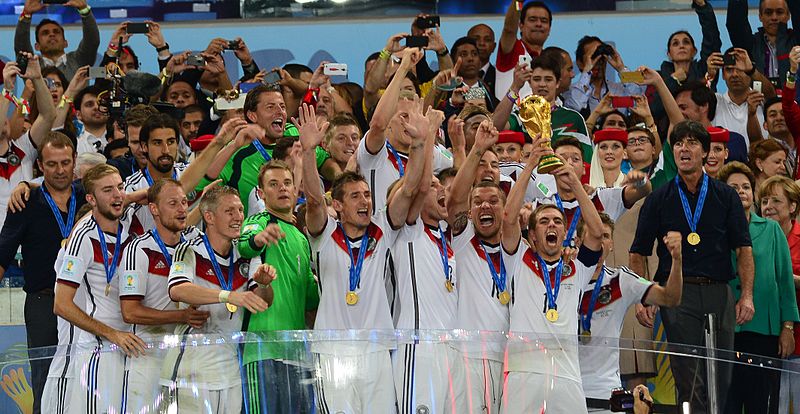 The FIFA World Cup 2014 ended last Sunday with a great game between Argentina and Germany. Like so many people around the world, we at Wovenware followed as many of the games as possible. We even had a temporary spot in the office for a monitor that showed all the live games.

It doesn’t matter if your team won or lost, the World Cup is a wonderful event that can unite us all in a healthy spirit of competition and can teach us some valuable lessons. In my opinion there are three valuable lessons every entrepreneur should have learned from the FIFA World Cup 2014.

Always Play to Win … Specially if You are Winning

As an Entrepreneur we are always accustomed to being the under dog, the new kid on the block, the one that has to fight for each new customer. But what happens when we suddenly make it? When we start making our target goals? When we get our funding? When customers call us first? … Is it time to celebrate and bring out the champagne? NO, it’s time to work harder.

Remember the United States vs. Portugal game. The US was winning this game and suddenly they started to take it easy. I remember telling my wife: “It’s as if the US does not want to win. They are taking it easier. Now is the time to play harder!”. If you did not see the game, Portugal ended up tying the game during the last minutes of the game. The US Team should have won this game.

On the contrary, remember the Brazil vs. Netherlands game. Even though Netherlands was winning the game they never stopped attacking. They even ended up scoring a third goal almost at the end of the game.

As entrepreneurs we have to be like Netherlands. We need to always work hard and when things seem to be going our way, we need to work harder. Remember that startups disrupt markets because established players are usually slow to change their ways. Never stop working hard and always visualize yourself as the underdog that must prove himself.

One Player Does Not Make a Team

During the World Cup we had great stories about single players “winning” the game for their teams. Remember Guillermo Ochoa the Mexican goalkeeper or even Lionel Messi from Argentina. When asked about the poor team performance even though they had won the game, the Argentinian coach commented: “Well we have Messi”. Well as experience has taught us you need a team to win, not just the best player in the world.

Don’t get me wrong you need superstars and A players in your team, but you can’t rely on them to always win your battles. You need to have a strong team that is always working together towards your set goals. If everybody in the team is not contributing or pulling their own weight then it’s more difficult for the team to accomplish their goals.

Entrepreneurs, even though A players are great to have in our teams, make sure all your team members are contributing to achieve your goals. Only good united teams will always achieve their set goals.

You are Already a Winner

On multiple occasions during the World Cup we heard, “oh, this team is really not good” or “X team will definitely not get to the quarter finals”. Look at the Costa Rica team “against” all odds they got to the quarterfinals and could have won the game. The truth is that just qualifying for the World Cup makes the team a winner. Don’t agree? Ask the other 178 teams that did not make the tournament.

As entrepreneurs we sometimes forget that we are all winners for taking up the challenge. It really does not matter if you do not accomplish your goal, fail to close your Series A round, or end up shutting down your startup. You are a winner just for trying. As one of our trusted advisors Randy Thompson always reminds us: “You don’t have to apologize for creating a company that sells X amount a year. How many people do you know that have built a company that sell X amount a year? Not many right.”

I know sometimes it’s hard to feel like a winner when we do not achieve our goals, but trust me, if you talk to other entrepreneurs they will remind you that you are a winner. That people like you is what we need to improve our economy … to change the world!

Have other lessons from the FIFA World Cup 2014? Please share them with us in the comments section.