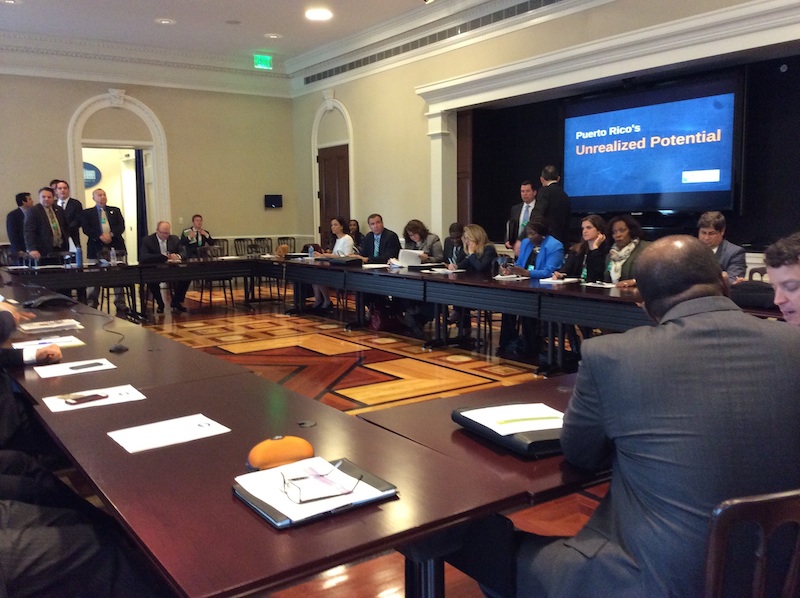 I’ve got to be honest. I love politics. I follow news daily and have opinions on almost every topic. I’m not a blind supporter of a political party views nor part of “el corazón del rollo” of any party. I have my own opinions on issues and on status.

I mention this to say that the taskforce meeting and the roundtables didn’t have a political feel to me. There are people saying that this was a show from the current Administration to promote the Lufthansa deal. Of course there were politicians and officials in the meeting from the party in power. But who else was supposed to go? They have the Constitutional power to represent us like it or not. There were also representatives from the minority party, business leaders from both parties, and NGOs that did a great job promoting their agenda.  As I explained in a previous post, it was an honor to be there.

The meeting was held in the Eisenhower Executive Building inside the White House complex. To get in, you have to send some information to the Secret Service before the meeting. Once there, you pass several checkpoints where you are checked as if you were on the TSA Precheck line in the airport. 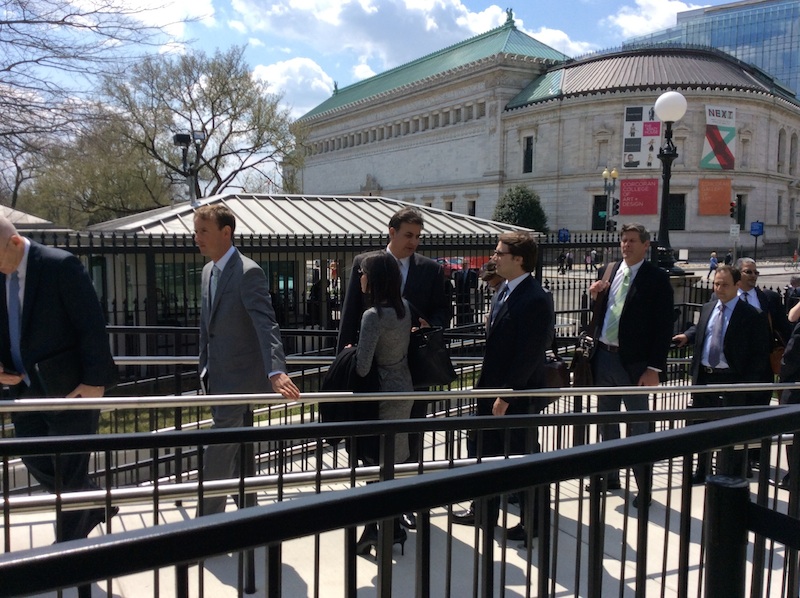 After that, we were escorted to the meeting in the second floor.

After registering at the entrance and receiving an agenda with the assigned roundtable, we proceeded to walk into the room. 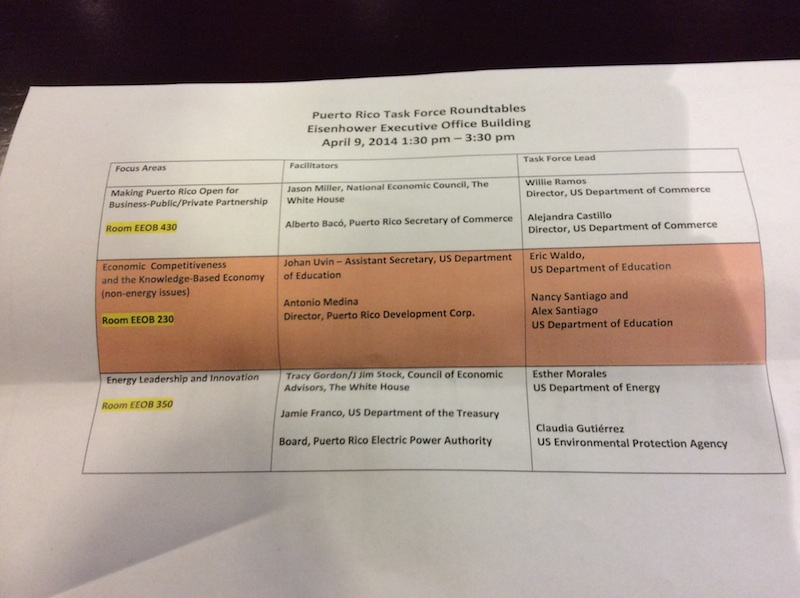 As we walked in, it was obvious that the attendees to this meeting were in another level. I again asked myself, what am I doing here? The who’s who of Puerto Rico’s Businesses and NGOs was there. Universities, local businesses, multinationals, non for profits, local and Federal Government … And the list goes on.

The greeting and initial remarks were given by David Agnew, co-chair of the President’s Task Force on Puerto Rico. He presented the agenda and explained that we were going to be separated in three group, one for each of the roundtables and after that we would come back to have a debriefing from the leaders of each roundtable. Then, he introduced Eduardo Carrera from The Boys and Girls Club to give a presentation and put everything that’s going on in Puerto Rico in context. You can see more in www.juventudpr.org. 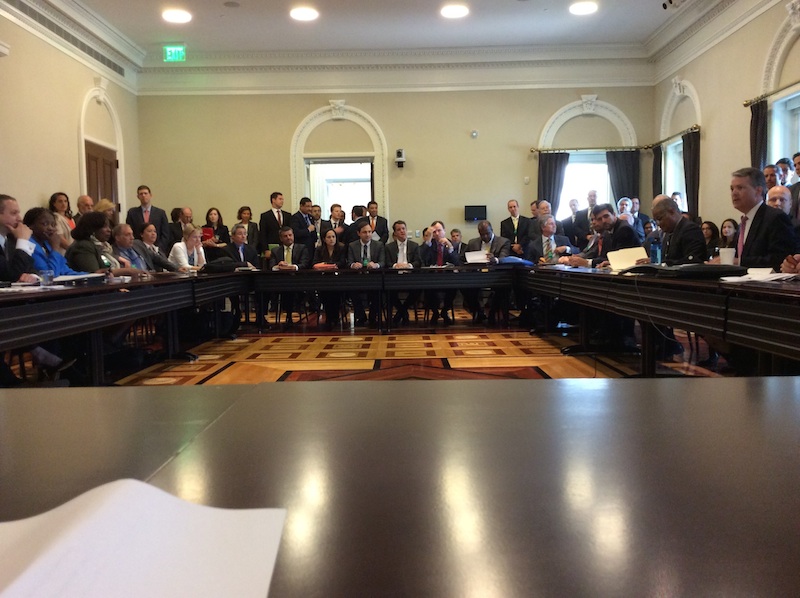 After the presentation, the meeting was opened to questions before we left for the roundtables. Eduardo Bhatia, President of Puerto Rico’s Senate, asked, “What is the desired outcome from the roundtables?” David Agnew responded, “What steps can the federal government take to help? What are the big items? We want concrete actions.”

They acknowledged the huge response and that the time allocated for the meeting wasn’t enough. Maybe we’ll have another meeting soon … maybe.

So we walked to the other meeting room. It was a smaller room with a beautiful colonial feel. Wood everywhere and your traditional George Washington painting on the wall. 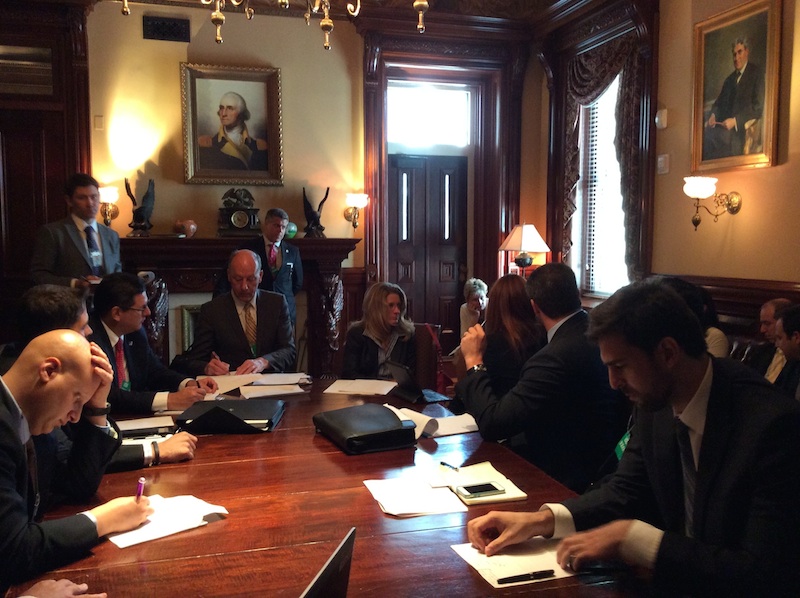 We started with a presentation from Dr. José Lasalde Dominichi and President Uroyoan Walker form the University of Puerto Rico (UPR). They explained how a joint venture from the NIH and the UPR allowed them to start a project to develop a manufacturing process on an HIV vaccine based on the only successful study on the subject. This was to prove how Puerto Rico’s advantage on STEM and in manufacturing drugs and medical devices was paying off.

Then, everyone started sharing his or her views on economic competitiveness and a knowledge based economy. We had very little time as the presentation took a good 15 minutes. John Uvin, Deputy Assistant Secretary at the US Department of Education, did a good job making sure everyone had some time to speak and Antonio Medina, Executive Director for the Puerto Rico Industrial Development Company (PRIDCO), did an excellent job summarizing each of the proposals.

There were proposals on:

As we got back from the roundtables, everyone had an opportunity to network. It was an amazing opportunity and that alone made the trip worthwhile.

Every roundtable gave a brief list of the proposals of each roundtable. Some were specific, and some were broad and general. Some of the most important proposals, aside form the ones in the roundtable I attended, were:

In the end, a call was made to the Taskforce. “We are here in good faith presenting proposals on the things we think can help Puerto Rico jumps start its economy. We expect that you (the Taskforce) don’t let these initiatives die and that there is follow-up on them” said Alberto Cordero. When confronted with this statement, David Agnew responded with a surprising statement, “Very rarely the White House convenes public elected officials and the private sector in an event like this. Take that for what it is.”.

I hope that these roundtables have some effect and help Puerto Rico move its economy in the right direction. The Federal Government is as responsible as we are for the precarious situation we are in. But there are a lot of people and companies that have the right intentions and the drive to do what they can to make Puerto Rico’s economy strong again. I know that at Wovenware we are doing just that.

Leave a Reply to Simmone

5 Responses to “What Happened in the Puerto Rico Taskforce Meetings”